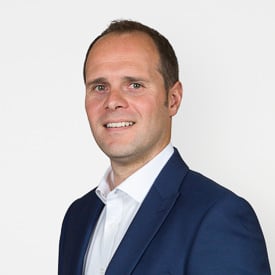 David joined Maven in September 2019 and is based out of our Newcastle and Durham offices. His responsibilities include deal origination and execution across the North East of England.

Prior to joining Maven, David worked at RG Corporate Finance for three years, advising on dozens of mid-market/SME debt and equity deals across the North East and nationally. David also spent 12 years at Barclays Corporate and Investment Bank in London, where he undertook several roles across the debt, credit and portfolio management teams, predominantly transacting leveraged finance and cash flow deals in the mid-market.

He has a MBA with Distinction from Durham University, alongside an undergraduate degree in International Business. He has also studied Corporate Finance at London Business School.

Outside of work David enjoys running, cycling, football (when his legs allow it) and hiking, but he mainly loves going on adventures with his family. He is also an avid reader who loves to learn, so when his kids afford him the time, he can often be found with his nose in an obscure business book.

Working alongside some of the most passionate, innovative and skilled entrepreneurs in our region is unquestionably the most exciting thing about my job. Getting intimate knowledge of their businesses and helping them execute and achieve their growth ambitions is incredibly fulfilling. The level of skills and knowledge shared across the Maven team means that I always learn something useful every day. It also ensures that as a team, we are always delivering the best possible outcome for the companies we support.

Meet our other team members

With a network of ten offices and a national investment team, including professionals from a variety of commercial, financial and industry backgrounds, we have an enhanced regional presence giving us a different perspective to many other funders.